Day 10: The Twelve Days of Christmas

Hello everyone and Welcome to……..
Day 10: Ten Lords a Leaping of the
Twelve Days of Christmas. Last year when I was thinking about this, the first thing that popped into my head was Frog Princes. I have a big 'ol ceramic frog....and I call him my frog prince. And he is so cute. And since then I have gotten two more smaller ones. I just love them! Anyway after thinking about this I got on the internet to see about doing a frog cupcake. And I finally found the one I liked. .
I took that idea and ran with it my way. And here HE is:
One of the Lords a Leaping

The Prince of All Frog Cupcakes
You'll need:

Instructions:
1. Stir drops of food coloring into the frosting until you have the desired shade of green.
2. Spread a dollop of frosting on the center of each cupcake.
3. To create each frog, press a jelly fruit slice down into the frosting. For eyes, slice a gumdrop in half. Then snip a mini marshmallow in two and press the halves against the cut surfaces of the gumdrop. Press a chocolate chip into the center of each marshmallow half. Place the eyes on the cupcake just behind the jelly fruit slice.


As you can see Prince Naveen is really cute and easy  SO I just decide to add a little  g l a m to him.
My Frog Prince...... 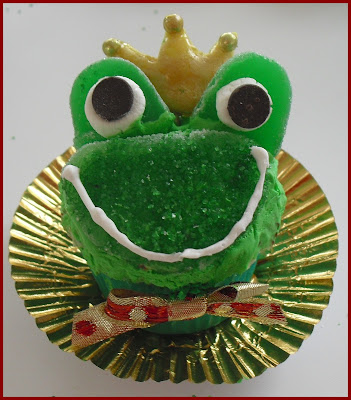 You bake the cupcake in a GREEN  FOIL cupcake liner. When cool frost him with bright green icing. IF  you can find a Green jelly fruit slice locally then more power to you. I went to a trillion places from here to Texas. They are at some specialty candy stores but not alot. But just to find them locally well......there weren't any.  So I ended up using green jelly fruit slices from a plastic carton holding many colors and flavors. (Walmart/$2.50). I then rolled out the slice and cut it into the big smile and with white icing 'piped' a smile on it. As you can see my smile has a break or two so when piping it use a steady hand. The eyes were done the same as the description by Disney. And the crown is made up also of yellow starbursts BUT I brushed on some edible Pearlized GOLD Dust (from cake decorating specialty store) and then put GOLD DRAGEES on the points. I made a cute 'Royal' bow out of gold metallic ribbon and 'pinned' it under his chin. Then I opened up and flattened a GOLD FOIL cupcake liner and set him on the 'outside' of it. The 'inside' is facing down. I felt this made him very Regal and Handsome as I wanted my LORDS A LEAPING to be. And isn't he just the CUTEST cupcake!! And the kids LOVE him. And the kid in all adults will love him too. They are just too hard to resist.

Hi Nann. Oh my goodness. They are so darn cute. Don't ya hate that when you need a jelly slice or something for a cake and you see them all the time in the store and when you want it, it's not there? Happens to me all the time. LOL Just lovely little froggie.

Thanks Anne for your delightful comment. If ANYONE knows an internet site to get the candied lime fruit slices please let me know and I'll add it to the post.

Well, you know I adore these little froggies..so cute. I can imagine children squeeling with delight as they bite into one. Great job as usual.

"Glam"....Your creativity amazes me! Keep up the good work, and Thanks for sharing!

No worries Nann! Next week I need to find the box that will let you edit your links! Sorry I haven't figured that out yet!!! Glad to have you linked up!!! XO, Aimee

Grand Minnie here-Boy oh Boy, those are cuteeeee! I love the "Glam" you added. They were perfect! And any kid would LOVE them. Hey adult who loves good and cute cupcakes would LOVE them. :-)

Roberta here!You are doing a great job!!! I love your blog!!

Ohhhhhh Nann!!! You did it again. I just love these leaping prince froggies!!! You are so creative & I just love seeing all of your wonderful ideas!!! Thank you for sharing!!
Dee

Thanks Debbie, Peggy, Aimee, Grand Minnie, Roberta, and Dee for your comments. I appreciate them SO much.

Nann, I love the green frog! So cute and yummy too! Thanks for sharing!

I just discovered your blog from a Pinterest link - your Twelve Days of Christmas is delightful! 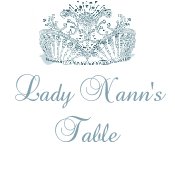